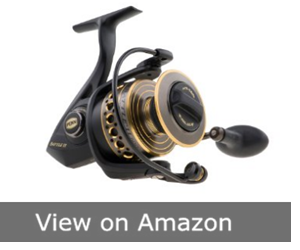 The best fishing real for the money in 2017 is Penn Battle II Spinning Reel!

Without a doubt, Penn Battle II Spinning Reel is one of the most sophisticated, accomplished. This reel was well accepted when it hit the market a few years ago. It was professional and amateur fishermen most darling spinning reel.

Penn Battle II Spinning Reel is an open face reel that comes in eight different sizes. This option helps everybody – both first-timers and experienced fishermen to optimize fishing.

You can easily choose the reel that suits your individual needs and intentions. The manufacturer of this reel ensured they deviate from conventional reel where there is not so much difference among different models.

Penn Battle II has models that range from 1000 to 8000 and so on until the final version. We would have loved to explain each of them, but they are too many, and that won’t be reasonable. However, the Penn Battle II is designed as a big game reel to capture deep-sea fishes such as Marlins and Tunas.

Let’s take a look at the features of Penn Battle II and discover what made this reel so special.

This version of Penn Battle II comes with six seals which help to keep the unfavorable seawater away from gearbox and drag system.

Other Features of Penn Battle II

Next Page: Buyer’s Guide: How To Choose A Fishing Reel