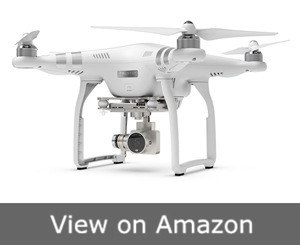 This great drone with camera is capable of recording 2.7K HD videos.

It has got a fully stabilized three axis Gimbal, which started from Phantom three onwards as against previous versions of the Drone camera.

One of the best features of all the Phantom best drone cameras is the hovering, which makes it easy to capture images and footages with stability, it is simply like a tripod holding the camera in the air, and also you can turn it to fit better video or photo capturing angle and it works all fine.

This is for aerial photographers who need extended range and good quality at affordable price.

One of the best qualities of this DJI Phantom Advanced drone camera is that there is no fish eye in the lens as it was there in earlier versions. The video is very stable, and photos are well in focus.

There is in built Director app which allows you to edit and compile videos and photos; it’s very easy to use.

The camera is nicely integrated with gimbal, and you can record still images as RAW or JPG.

One can easily change the camera settings such as aperture, shutter speed while the drone is in the air through mobile app or device.

Further you can also easily change the settings of the controller and drone through the mobile device.

It also allows you to view the footages in 720 P live while the drone is taking the footages in the air. Similar to DJI Phantom 3 Professional, it has also got vision positioning system to record footages inside.

One of the problems with all DJI Phantom drones of this segment is the tedious task of dealing with the firmware updates and then subsequent calibrations of the device.

Sometimes you get I right in one go, and then after few days comes new update and you re-calibrate, but some complain that it pops some error, which is removed by some great degree of research.

Secondly, if you happen to face any issue regarding the hardware, then the parts are expensive, so one needs to be quite cautious while using it as any damaged to any of the parts might cost you significantly.

Comparing with other Drones in the segment then this best camera drone is not as expensive as DJI Phantom 4 or DJI Phantom 3 Professional, also it record 2.7K HD videos.

Therefore if one is not ready to shell great amount of money this drone camera will be very useful by giving almost similar quality of videos as its advanced versions.