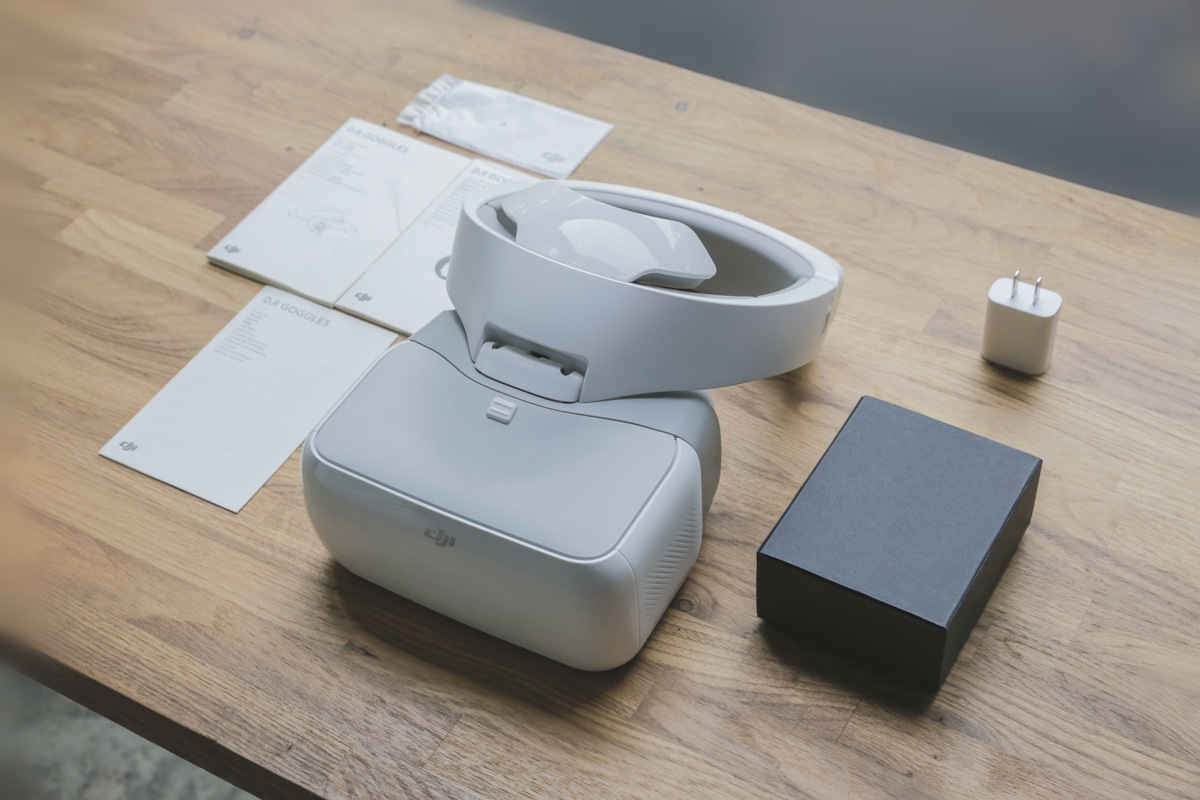 Contrast Goggles in Beijing DJI conference last year, the official version of DJI Goggles did not change much in appearance and experience.

Usually, DJI attracts us to pay with its black technology products. Can DJI make us pay $ 499 for this Goggles VR glasses this time?

Why does DJI develop Goggles?

As early as last year, we have discussed the relationship between camera drone and headset. We were predicting that DJI might develop VR glasses to support and control camera drone.

We had no expectation at that time. But DJI did not give up the development of VR headset which can greatly optimize the aerial experience. So, DJI Goggles appeared. 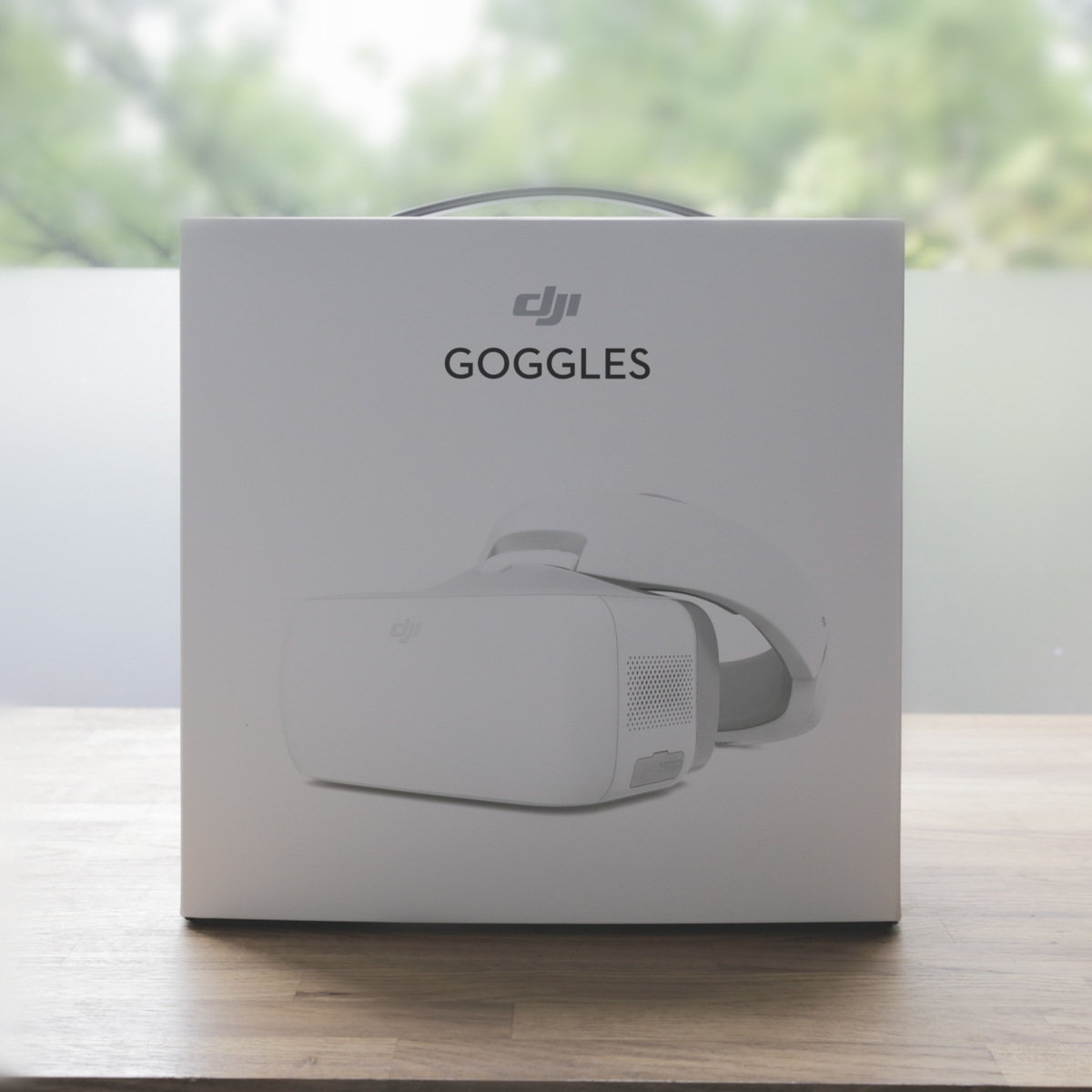 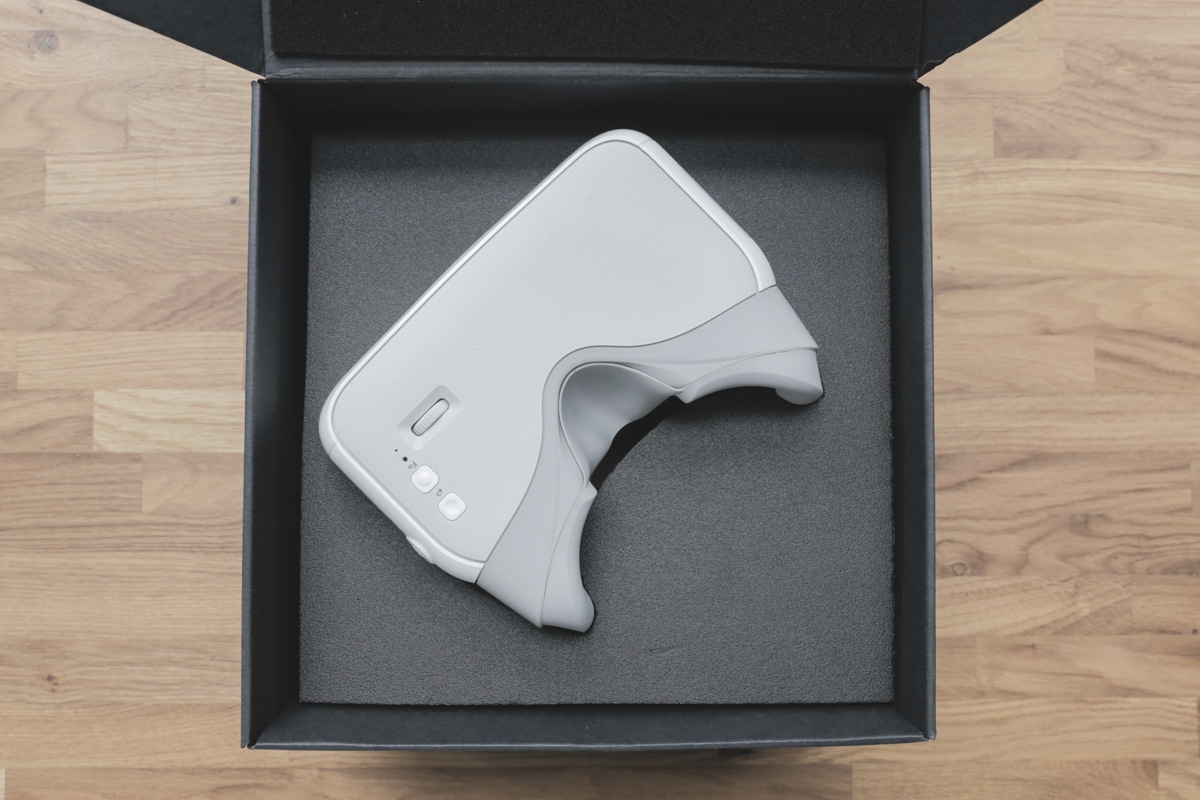 So, in order to strengthen the flying control of the aircraft and to increase the entertaining of flight, FPV glasses came into being.

In general, one of the most typical features of FPV glasses is the use of a very low delay in the simulation map. All aspects of the design are to monitor the flight status of the shuttle. 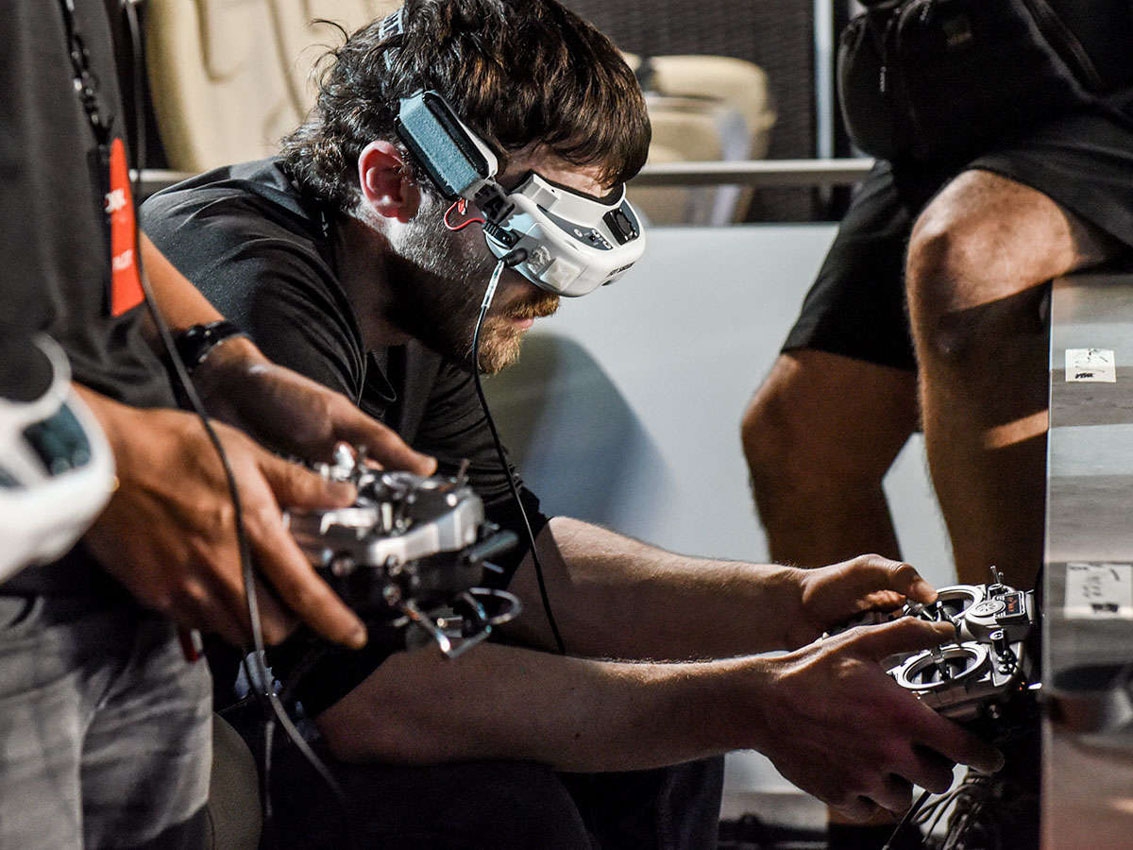 How do manufacturers of camera drone meet the needs of users?

Camera drones focus on display, rather than flying. So, they require higher definitions of figures, and the picture delay is not very strict. Due to amateur players require higher enjoyment when flight, so headsets of camera drones support somatosensory control and flight; Considering that these users have little demand in drones modification, and they have a high demand for ease of use, so the requirement of integration of headset display with drone camera is very high. Some manufacturers even use the phone as the display body directly.

A different user demand leads to a scale market of the display headset. However, performance and functionality need to be changes. These changes we can see in the Parrot Bebop, Zeiss VR ONE virtual reality glasses and other early products.

So, we consider that DJI is standing on the shoulder of predecessors of camera drones and VR glasses, and has developed DJI Goggles for the best use of its own users. 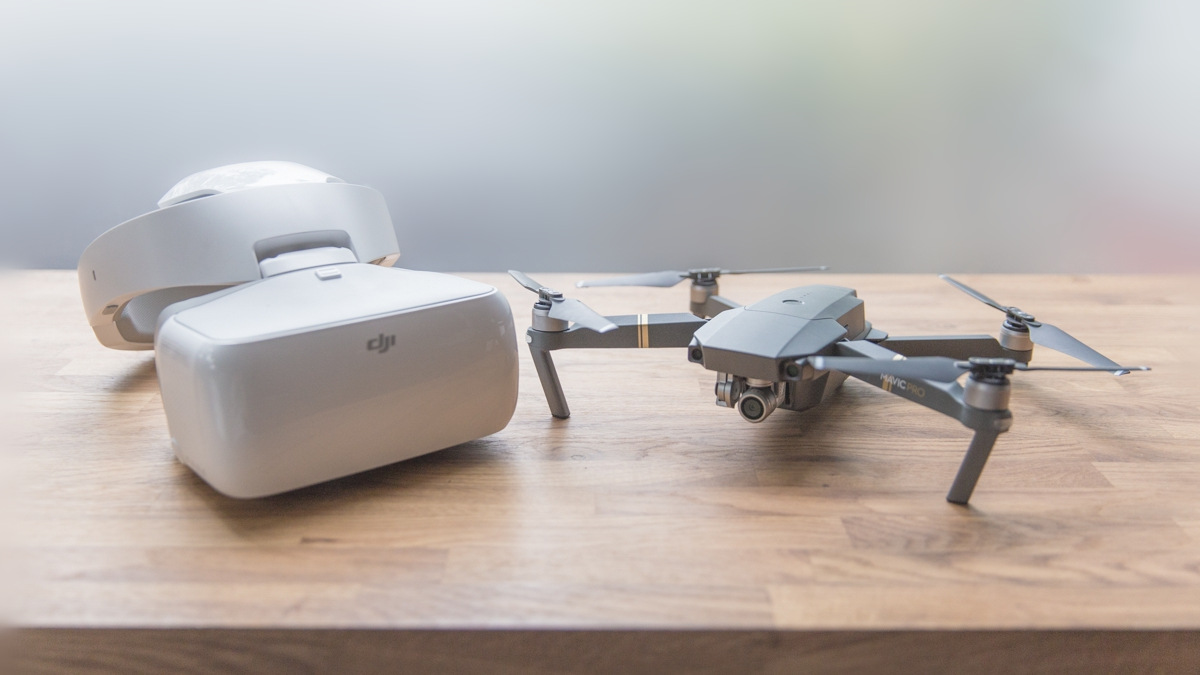 DJI Goggles may be the first DJI product to “imitate” the design of other similar products. In the DJI Goggles conference, I has said this.

Because, before the DJI Goggles, PlayStation VR has been given such a headset display design long before, and then Xiaomi also introduced a similar design based on the mobile phone VR. 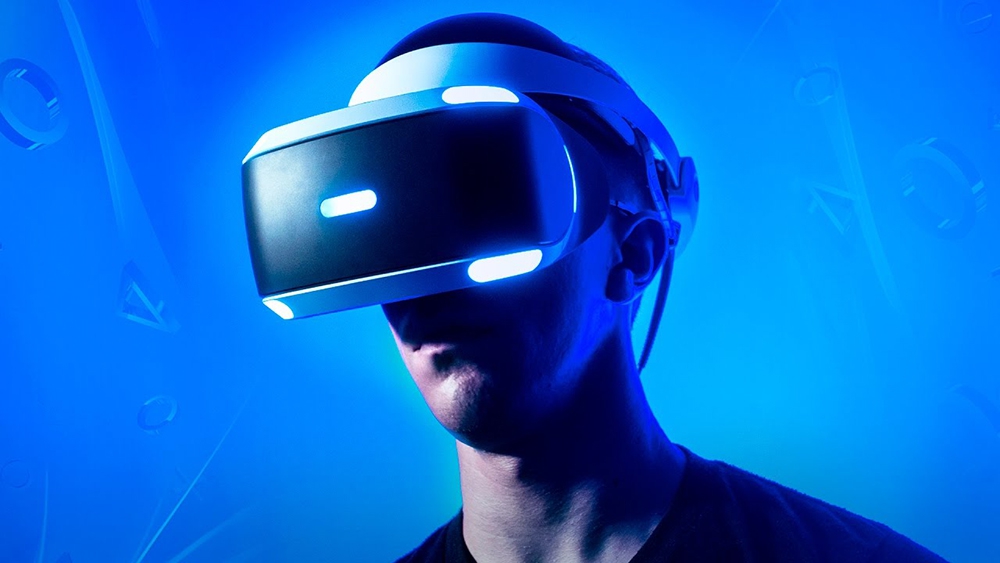 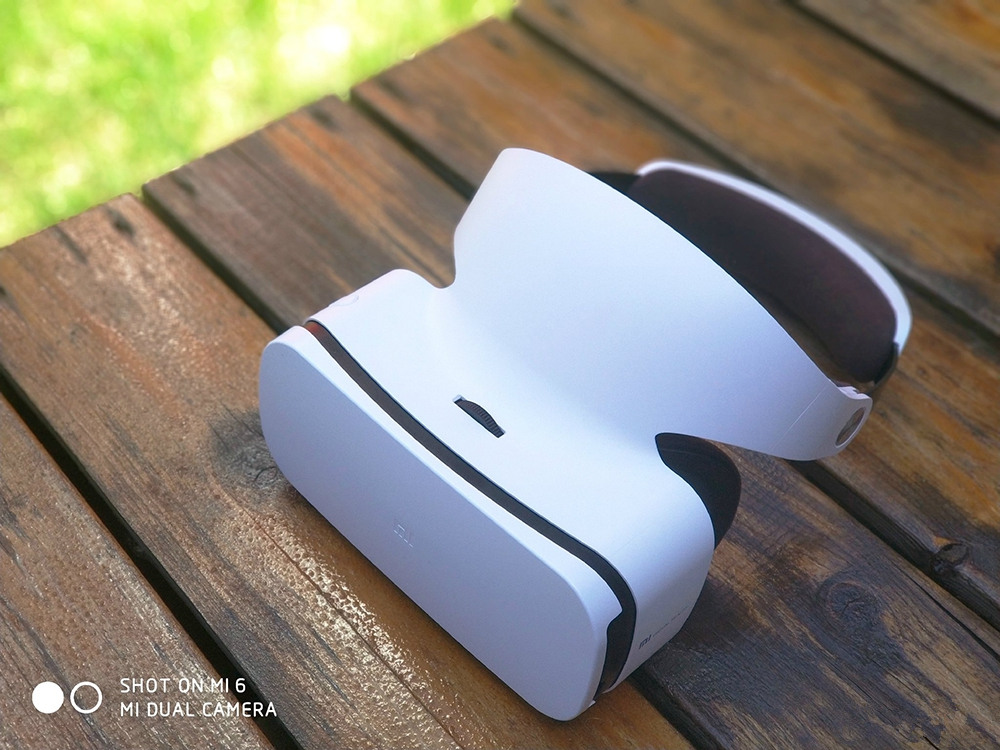 We do not discuss the “plagiarism” here. Because in my experience, I found that if you want to wear the VR device conveniently and stably, the ring headband is the best choice.

In the display module, it integrates the power button, touchpad, return button, Fn button, interpupillary adjustment knob and HDMI, Micro-USB, Micro SD card several commonly interface. All the buttons are arranged on the right side of the headset. It can be controlled easily with one hand. 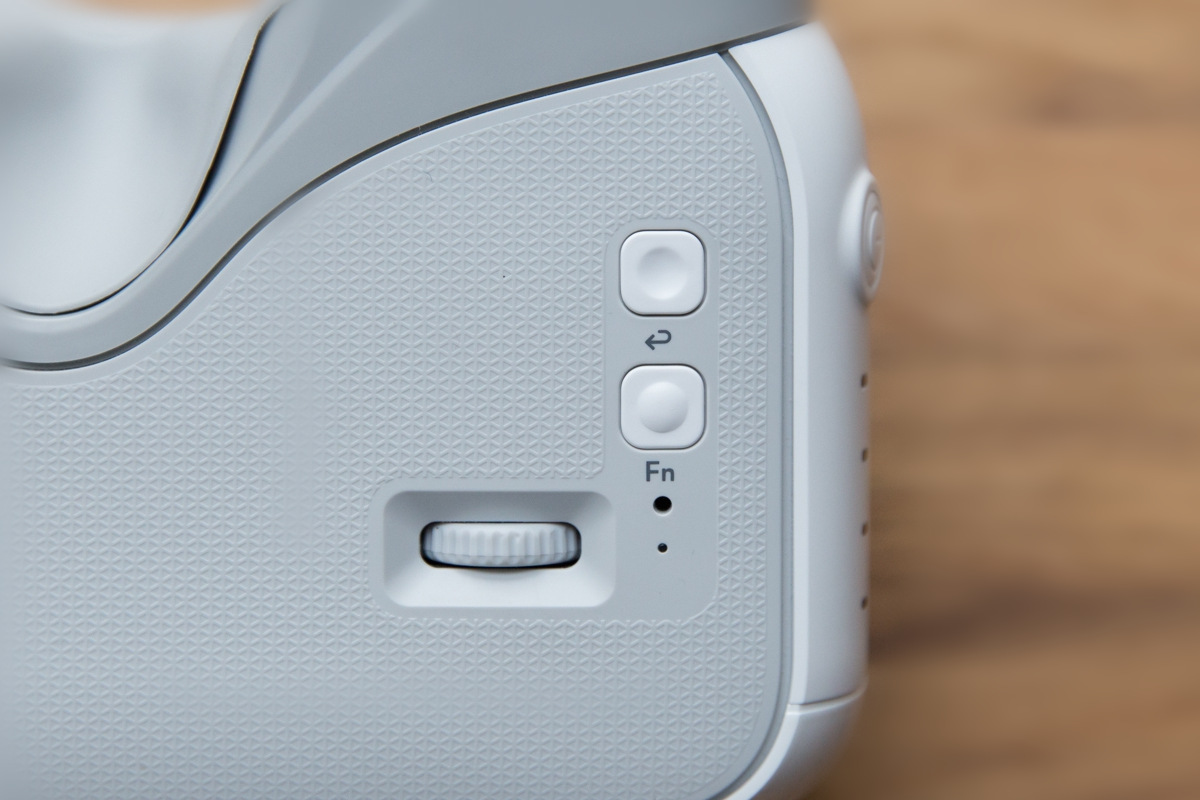 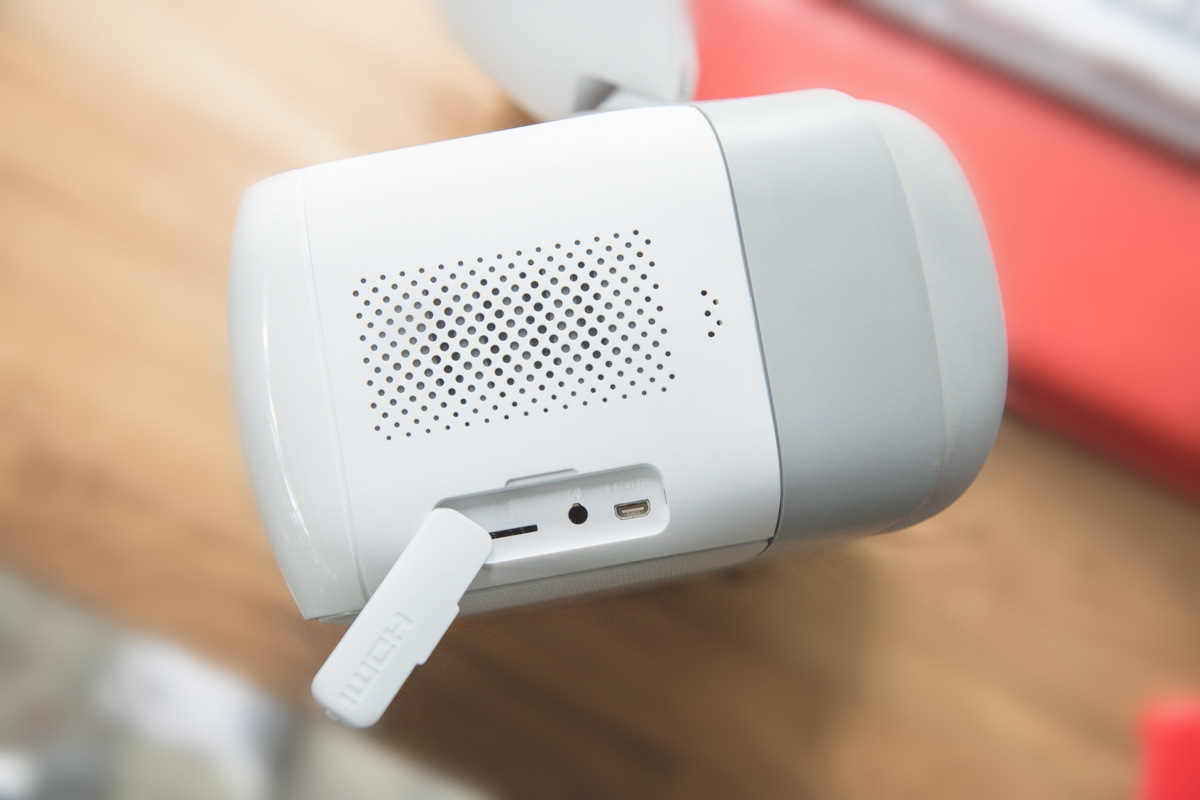 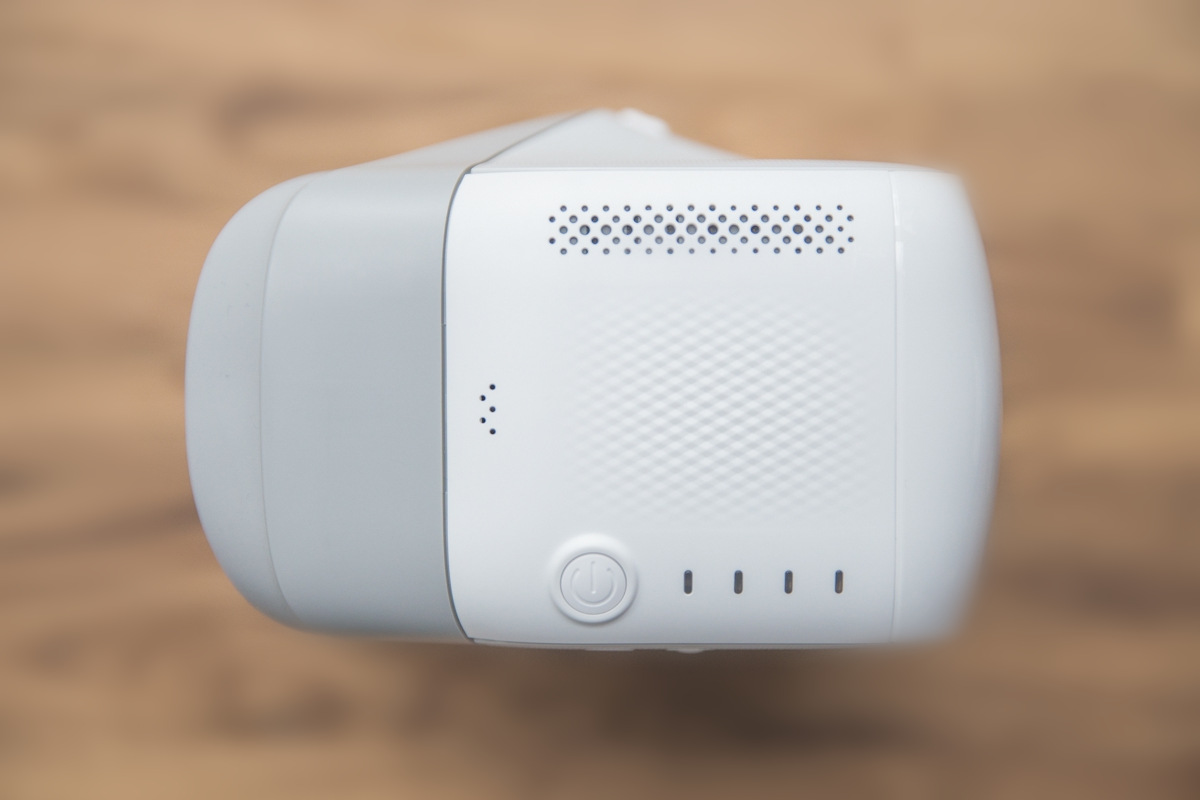 DJI Goggles’s main control is done via the touchpad. This touchpad supports two fingers, single finger sliding and click, the response is very fast, even too sensitive. Occasionally, it will identify sliding as a click. However, you can double-sliding to lock the touchpad, in case the glasses are mistakenly touched.

Around the display module, it uses silica gel as a cushion. So, users can easily wear it without any obviously light leakage. 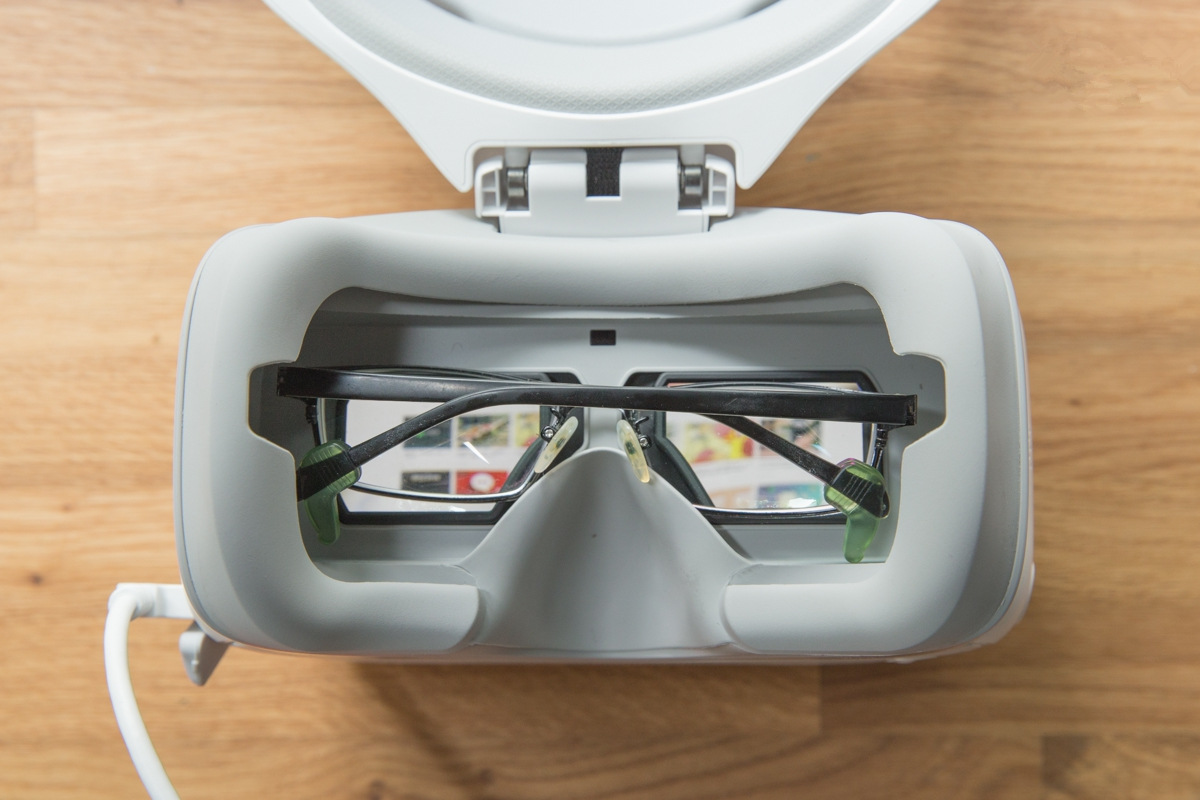 Compared to the display module, the ring headband does not seem so important. However, without the ring headband, we cannot open DJI Goggles, because the batteries and antennas are actually on the headband. 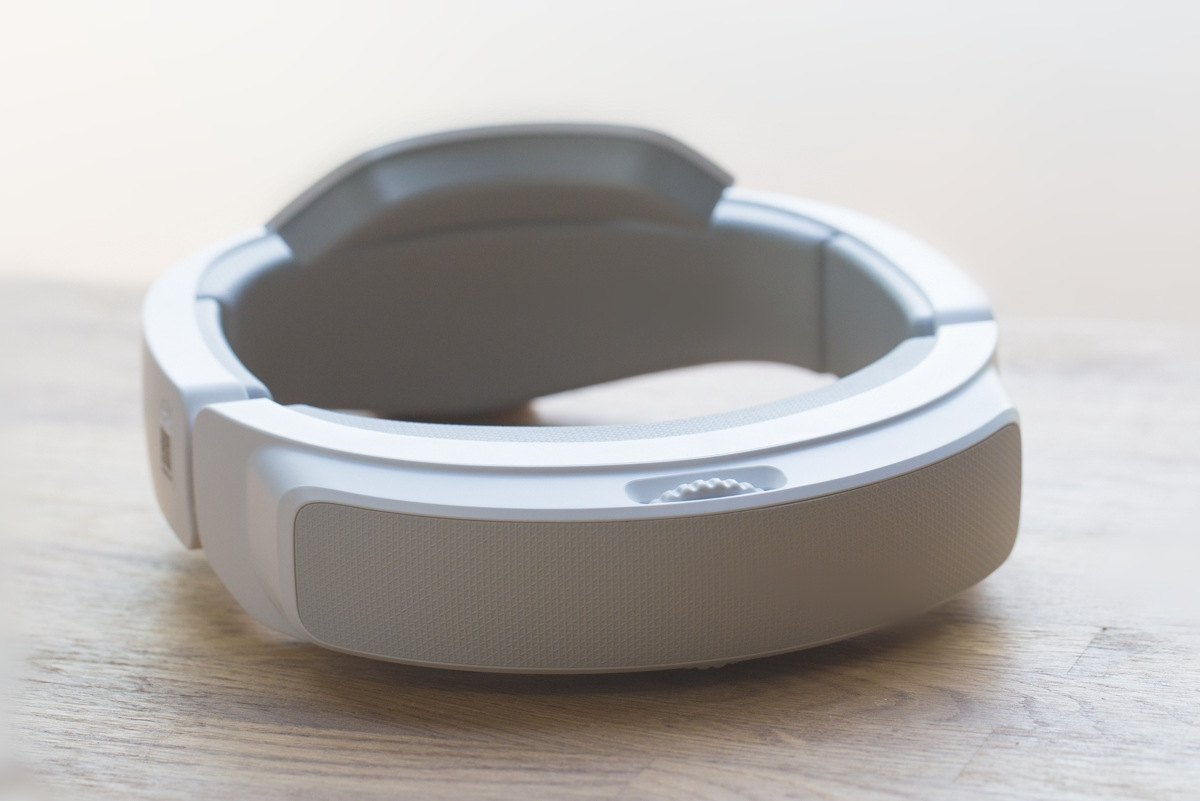 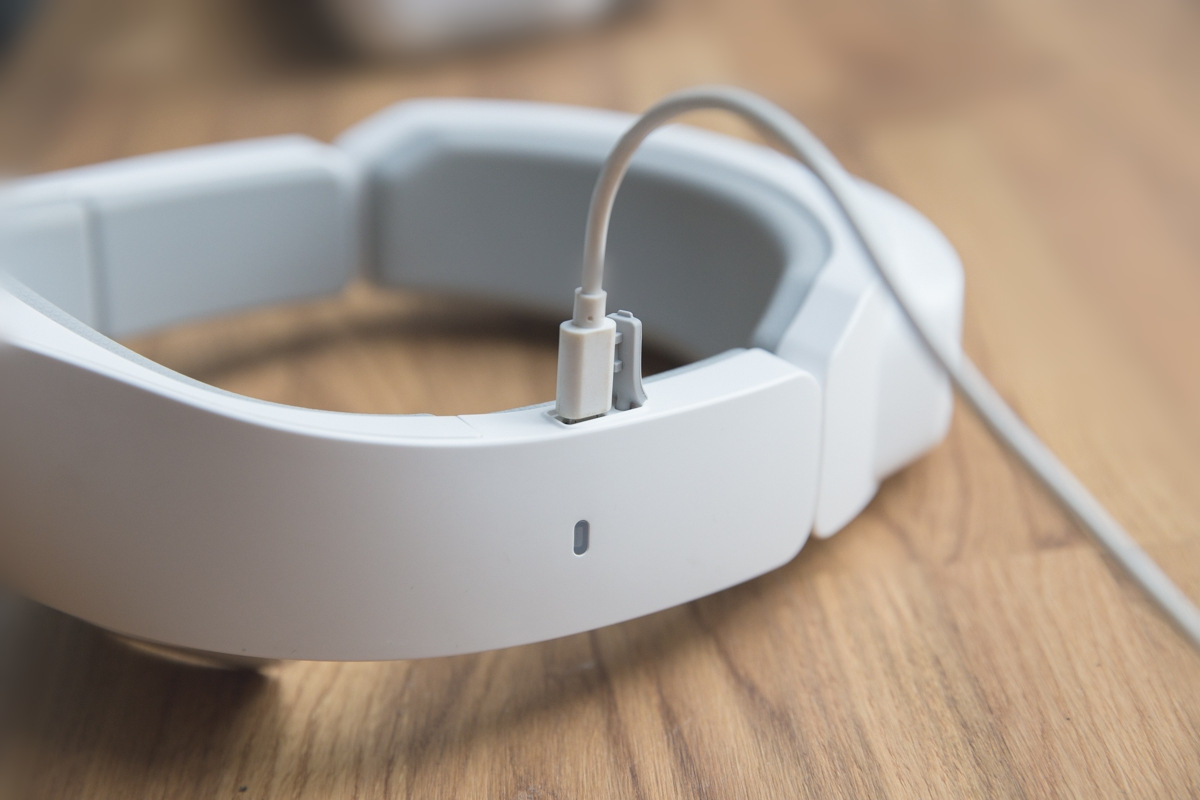 Now, it is not difficult to understand, why the connection of DJI Goggles headband and display module uses such a complex interface. 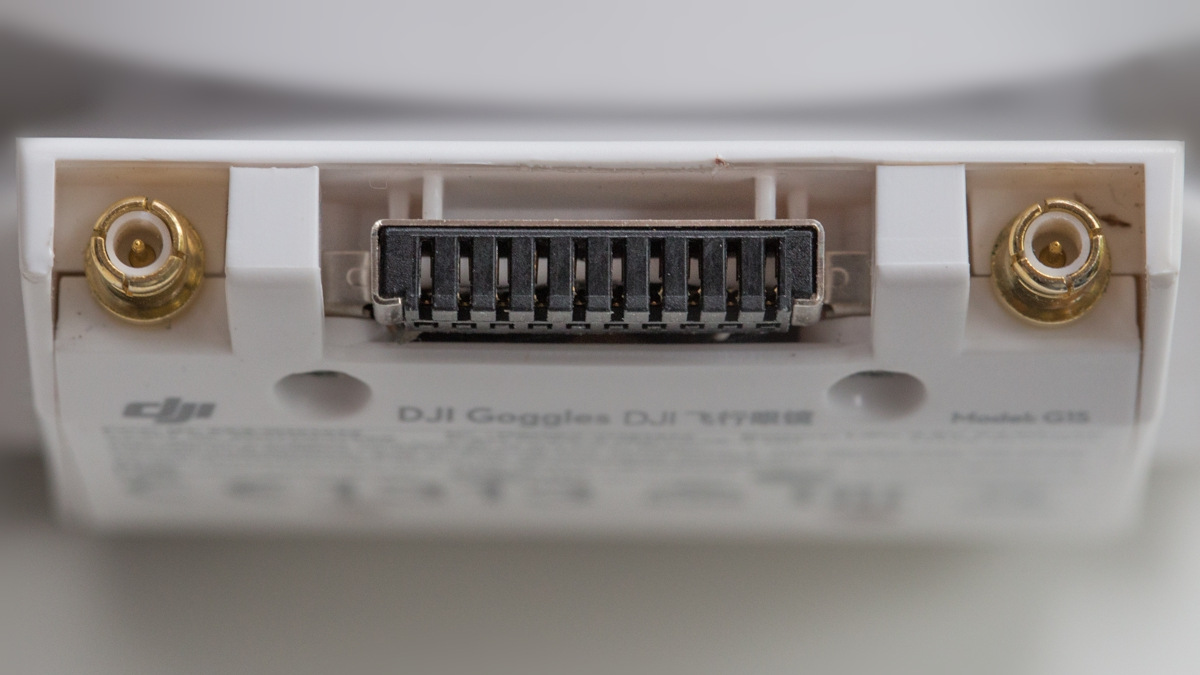 (Round for the antenna interface, middle for the battery interface)

Finally, let’s talk about the disadvantage – portability. If you are driving, then you can skip this part directly. The appearance of Mavic Drone let some camera drone lovers say good bye to the big boxes of Phantom drone. You can put the Mavic drone in a daily backpack. Some people even use messenger bags to carry a full set of Mavic drone. However, the DJI Goggles will make users to pick up their big bag again. Now, you can apply DJI Goggles with the newest DJI drone called Spark Mini Quadcopter.

Although, the combination of DJI Goggles and Mavic is much smaller than the box of Phantom 4. But it still need 3 times more space than Mavic. This will squeeze the space of the backpack. After we tested, DJI Goggles really is not a portable drone accessory.

In a photographer’s point of view, whether it is a camera, or camera drone, if you want to get a good shooting effect, it is inevitable to pay more physical strength. For a powerful camera, the lens will certainly be heavier, larger. So the camera drone and accessories are the same. We do not deny that future flying glasses may evolve to a size like normal glasses. But in the moment, DJI Goggles’ work and performance are worthy of its weight and volume.

So please do not care too much about the portability. Luckily, it can still be squeezed in to a bag.

Wear: Between the easy and the strong, DJI chooses the former

As long as you know it is a headset display, it is not difficult to understand the way of wearing a DJI Goggles, and this is the benefits of its two-stage design – easy to simple.

A complete wearing process of DJI Goggles should be divided into these steps:

Wearing the DJI Goggles is faster and easier than other VR glasses for drones. The sponge pad around the headband is also soft and very comfortable.

Next Page: Disadvantages of the Goggles Wearing Design