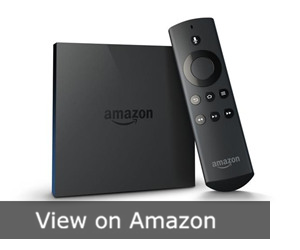 This TV box has a faster processor and supports 802.11ac Wi-Fi standard. It now streams Netflix and Amazon videos in 4K HD which is the highest definition for TV box.

The optical audio output has also been replaced by a MicroSD card slot (to bolster the 8GB of internal storage) used for storing more games and apps.

We also got an article about the top 10 Amazon Fire Apps, which may help you know more about this device.

The 4K Ultra HD feature allows you to connect the Fire TV to your 4K HD TV and can watch the 4K HD video at about 360fps.

Amazon needed more processor for 4K TV watching, so they upgraded the chip from Qualcomm Snapdragon to a 64-bit Mediatek quad-core which is about 75% faster.

The Nvidia SHIELD should also take credit with its Tegra X1 processor making it the most powerful/effective streamer around offering a faster performance. Fire TV is the upgraded version of the Fire stick.

It is not too different form its predecessor, but that is no issue. It is smooth and has an exterior shiny enough to fit into even the most moderate of modern living rooms.

Going through the same process, you speak into the remote’s microphone and look up for titles, actors, characters and genres, and the Fire TV is retentive enough to display relevant apps and content.

The voice recognition includes some helpful integration, and it works well with certain apps such as Crackle and HBO Go.

Don’t expect Netflix videos to appear in the search results, and the full list of services for a given show or movie is hidden behind a menu button.

One of the main reasons why you should buy the new Fire TV is to get Netflix and Amazon’s 4K content on your TV. The set-best box is awesome when used with Amazon Prime services. It is far less expensive and to an extent more capable.

Next Page: 3. TiVo BOLT - Best TV Box with Recorder in This List